XRD test is one of the commonly used tests, you may not know much about it, but this article will introduce you to the problems of the XRD test.

What is the use of XRD Test machine?

Can you see its purity? Or do you notice that it includes a particular functional group? When X-rays hit the material, scattering occurs. The coherent scattering of X-rays by crystalline substances is a diffraction phenomenon, that is, the incident beam does not diverge but its direction is changed and its wavelength remains unchanged when the incident beam exits. This is a characteristic of crystalline solids only.

Currently, the most powerful approach for studying crystal structure is XRD (X-ray diffraction) (such as the type and position distribution of atoms or ions and their groups, the shape, and size of unit cells, etc.).

How to determine the quasi-crystalline structure of the sample from the XRD pattern?

How can you tell the difference between amorphous, quasi-crystalline, and crystalline structures in XRD patterns?

There isn’t a precise line that divides the three. If the sample is a more “crystalline” material, the resultant XRD XRD test pattern will have multiple or more generally independent narrow “spikes” (2 widths at half height in the 0.1°–0.2°; this width can be regarded as the “minimum width” of the crystal diffraction peak specified by the experimental conditions). If these “peaks” are greatly expanded, it may be established that the crystals in the sample have a particle size of less than 300 nm and can be referred to as “microcrystals.”

There is a Scherrer formula in the X-ray diffraction theory of crystals: the thickness of the crystal grains in the diffraction direction can be estimated from the amount of spectral line broadening.

The amorphous diffraction pattern is distinguished by a smooth shift in the intensity of scattered X-rays over the whole scanning angle range (from 2 12° to many tens of degrees), with one to multiple maxima values. Because the intensity of the direct beam is initially quite strong, it rapidly falls as the angle is increased and gradually trends to the instrument’s background value at a high angle.

From the point of view of the Scherrer formula, this phenomenon can be regarded as the result that the diffraction peaks of the crystal being greatly broadened, overlapped, and blurred due to the extremely fine grain size. The “short-range order” between particles like atoms or ions, which is the setting of the “amorphous” microstructure we imagine, is the limit of grain refinement. A maximum on an amorphous diffraction pattern relates to a frequently occurring interparticle distance in the amorphous.

The “quasicrystalline” state is the transition between these two types and some “amorphous” materials.

When doing X-ray diffraction, if a different target is used, will the spectrum be the same?

When doing X-ray diffraction, if a different target is used, such as a copper target or a Cr target, will the spectra of the two be the same? If different, do the position and intensity of the peaks change? Are there rules?

A crystal’s own set of d-values is inherent in its structure and can be used as a marker parameter for the crystal substance. Therefore, regardless of the target X-ray tube used, a set of d values for a sample obtained from the obtained diffractogram is independent of the target material. The relative intensities between the diffraction peaks on the diffraction pattern are mainly determined by the crystal structure, but the absorption properties of the sample are also related to the wavelength of the incident rays. Therefore, the relative intensities of the diffraction peaks on the spectra obtained with different targets for the same sample will be slightly different, which is related to the target material.

Revisit the Bragg formula and the intensity formula for diffraction, and you have all the answers to your questions.

The above is the arrangement of the three common problems of XRD. If you need an XRD test or the XRD instrument, you can contact Drawell XRD manufacturer. 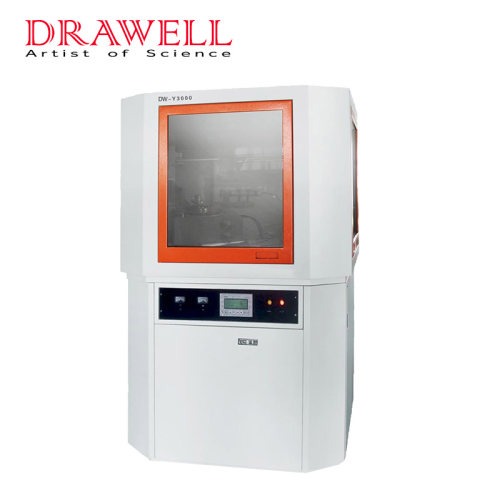